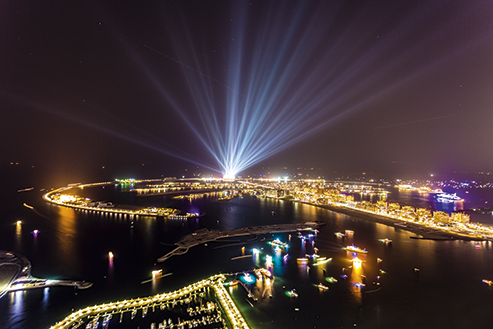 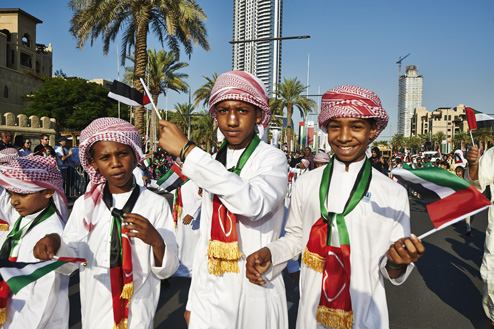 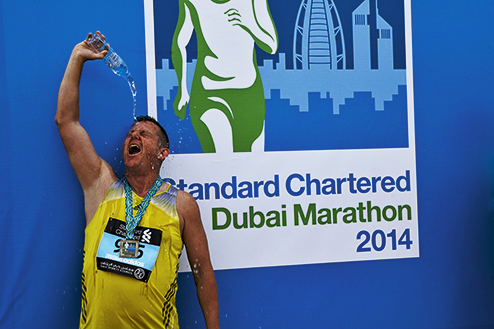 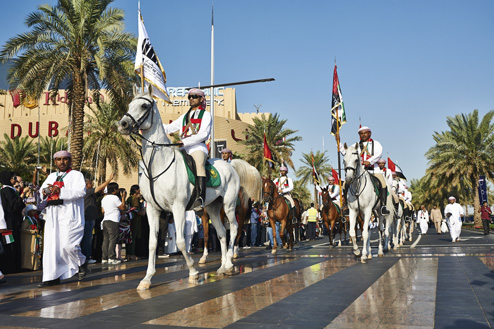 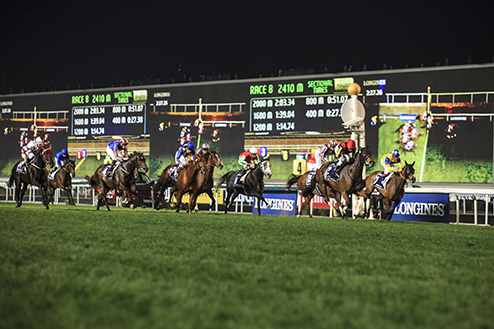 Dubai Shopping Festival
Established in 1996, the Dubai Shopping Festival is a great time to be in the city, with bargains galore for shoppers as well as many activities organised in malls across the city. Film festivals, special events for youngsters, impressive street displays, night fireworks, and international fashion shows provide some of the cultural and entertainment programmes on offer. The prize draws held in participating malls are popular.
Omega Dubai Desert Classic
Emirates Golf Club
This longstanding PGA European Tour fixture has been won in the past by golfing legends such as Ernie Els and Tiger Woods, and is a popular event among Dubai’s golfing community.

January
Standard Chartered Dubai Marathon
This event attracts all types of runners, from those aiming to fundraise or work off that festive tummy in the 10km road race or 3km charity run, to dedicated pavement pounders and several of the biggest names in long distance running who tackle the full 42km.

February
Emirates Airline Dubai Jazz Festival
Festival Park
During its 13-year-long history, the Emirates Airline Dubai Jazz Festival® has been an attraction for many fans from all over UAE and the region. Under the slogan A Unique Take on Music, Art and Lifestyle, the 14th edition is certain to be yet another one of a kind experience for all. The 2016 Main Gigs will run from February 24- 26 at the Dubai Media City Amphitheatre.
February-March
Dubai Duty Free Tennis Championships
The Aviation Club
Firmly established on the ATP and WTP circuit, the $2 million tournament attracts the world’s top men’s and women’s seeds. Tickets for the semis and finals sell out in advance, but you can often buy tickets to the opening matches just days before at reasonable prices.
Dubai Polo Gold Cup
Dubai Polo & Equestrian Club
Some of the world’s best polo teams and players compete for the Silver Cup and Gold Cup in this prestigious and international week-long tournament.
March
Abu Dhabi Desert Challenge
This prestigious annual international event runs for five days around Liwa, in the vast Rub al Khali desert. It’s the season-opening round of the FIA Cross Country Rally World Cup and the FIM Cross Country Rallies World Championship.
Art Dubai
Madinat Jumeirah
An international art exhibition that sees visits from dozens of international galleries. Running alongside it is the Global Art Forum lecture and discussion board programme, plus art prizes including a people’s choice award and the $1 million Abraaj Capital Art Prize.
Dubai International Boat Show
Dubai International Marine Club
You don’t need to have big bucks to enjoy the Boat Show. The largest marine industry exhibition in the Middle East showcases yachts and boats from both local and international builders, together with the latest innovations in marine equipment and accessories.
Dubai World Cup
Meydan Racecourse
The world’s richest horse race takes place at the state-of-the-art Meydan race course. The huge prize fund (around $30 million), a buzzing, vibrant atmosphere, and the star-studded entertainment line-up ensure that the Dubai World Cup is one of the year’s big social, and fashionable, occasions.
Emirates Airline Festival Of Literature
InterContinental Dubai Festival City
This event draws a host of celebrated literary greats to take part in lectures, debates and panels. Past authors have included David Nichols, Kate Adie, Alexander McCall Smith, Carol Ann Duffy, Michael Palin and Margaret Atwood. Join the festival reading group to swot up on the latest releases by speakers.

April
Dubai Festival City Dragon Boat Festival
Al Kheeran
Open to social, school and corporate groups, this is a fun, competitive and sociable team building event.
Terry Fox Run
Atlantis The Palm
Each year, thousands of individuals run, jog, walk, cycle and rollerblade their way around an 8.5km course to raise funds for cancer research programmes at approved institutions around the world. In recent years the run has been held on the Palm Jumeirah (also known as Nakhlat Jumeira); another Terry Fox event is held in Ras Al Khaimah in March.

International Property Show
Dubai International Convention & Exhibition Centre
Featuring everything to do with buying international property, this show is particularly popular among expats who are looking to invest overseas.

June-July
Dubai Summer Surprises
Held in shopping malls around the city, with fun-packed, family-orientated activities and big shopping discounts, this is a popular event with Dubai residents and visitors looking to escape the summer heat.

October
GITEX Technology Week
Dubai International Convention & Exhibition Centre
Part of this five-day event is the renowned GITEX Shopper, where the public can snap up some great deals on the latest technology and gadgets, which are newly released at the exhibition.
Gulf Bike Week
Dubai Autodrome
More than 50,000 visitors attended last year’s event, enjoying stunt shows, motorbike displays, test rides and rock concerts, with previous acts including Nickelback, N.E.R.D and Megadeth. In 2015, the popular biking event takes place at the Dubai Autodrome, with a special Thunder Parade being held at the club's spectacular track.

Camel Racing
The Sevens
This popular local sport is serious business, with racing camels changing hands for as much as Dhs.10 million. Races run October to March and admission is free.

November
DP World Tour Championship
Jumeirah Golf Estates
The world’s best golfers congregate in Dubai for the final fixture of the PGA European Golf Tour and a shot at a share of the $8 million prize fund. This is one of Dubai’s great spectator events attracting many of the world’s top golfers, such as Henrik Stenson, the two-times 2013 and 2014 champion.
Dubai Airshow
Dubai World Central
A five-day biennial event that has been attracting visitors for more than two decades. It began as the Arab Air Show in 1986 and today is a huge draw for all those interested in the aerospace sector, with more than 130 planes on display and spectacular aerial flybys. For the first time in 2013, the airshow moved to a new venue at Dubai World Central.


Formula 1 Etihad Airways Abu Dhabi Grand Prix
Yas Marina Circuit
Abu Dhabi always puts on a great show. As well as the on-track action, live music has been served up by the likes of Kanye West, Prince and Kings Of Leon, while free concerts, exhibitions and competitions are held for the public across the capital.

Whatever Floats Your Boat
Festival Marina
This charity race invites schools and businesses to build boats from recycled materials to raise awareness of recycling and take part in a fun day on the water. For more info, email axelle.bouquet@ichdfc.ae.
November-December
Emirates Dubai  Rugby Sevens
The Sevens
This is one of Dubai’s biggest and most popular events, as more than 130,000 spectators descend on The Sevens Stadium to watch top international teams compete for the coveted 7s trophy, as Gulf teams contest the local competitions. With friendly rivalry between competing nations and prizes for the best fancy dress, the party atmosphere carries on until the small hours.
November-February
Powerboat Racing
Dubai International Marine Club
The UAE is very well established on the world championship powerboat racing circuit – in Dubai, DIMC have a busy annual calendar of both traditional dhow and full-throttle powerboat races.

November-March
UAE Horseracing
All horseracing in Dubai has moved to the impressive Meydan City. Racing takes place at night under floodlights with the winning horses, jockeys and trainers taking home prizes or cash. The season ends with the spectacular Dubai World Cup in March.
December
Dubai Winter Festival
The Dubai Winter Festival is a new feast of festive fun with an enhanced Christmas experience. It is everything you love about Christmas in one place. The Dubai World Trade Centre outdoor plaza will be transformed with a wintery Christmas wonderland from 17 to 19 December to help you step into the festive spirit.

Dubai International Film Festival
A hotly anticipated annual event showcasing Hollywood and international arthouse films, as well as work from the Middle East region. Premieres are generally held at Madinat Jumeirah, while screenings take place in cinemas across the city. The red-carpet opening gala event has attracted Hollywood stars such as Emily Blunt, Cate Blanchett and Kevin Spacey. It’s a great opportunity to catch non-mainstream films and do a bit of celeb spotting.
Mother, Baby & Child Show
Dubai International Convention & Exhibition Centre
Mums and kids will love this show, featuring exhibits by child-friendly companies and lots of entertainment for the little ones, plus endless samples and giveaways.
Sharmila Dance Gala
Centrepoint Theatre
Over 160 renowned dancers come together for a dancing extravaganza, with Latino, Soul, Indian and hip-hop performances. The Stuttgart Ballet and talented local dance companies have performed here.

Dubai hosts a number of concerts each year, and it seems to be attracting bigger and bigger names. Past acts to play here include J-Lo, Kylie, Robbie ...
Review